“I was lucky to have that experience as a teen because when you weren’t feeling yourself or you just were feeling a bit shit, you could go to your room and listen to all these albums,” she shares with BLUNT. “When people are so honest, you can listen to it as a listener and be like, ‘Yes, that’s how I feel’. And you’re not sugar coating it and you’re saying it how it is and you’re being yourself. I love that and that makes me want to be myself.”

With her current project LASHES, the goal is to share her own story in a way that’s “raw and honest”, in the same way that the alternative music she listened to as a teen so deftly had. She continues: “I think if it wasn’t for those bands, then the music that I’d be making today would be a more watered down version of my self-expression. And so, I’m just here to make really honest pop music and I hope that can help people or people can relate to it.”

Those bands ranged from Paramore (“Hayley Williams was definitely like my spirit animal”) to Underoath to Bring Me The Horizon and everything else in between. In terms of the current day, LASHES of course is influenced by Skrillex, but also experimental pop like her own, including that of Charli XCX. She was there for Paramore frontwoman Hayley Williams living out the dream and marrying Chad Gilbert from New Found Glory, but also a witness to the marriage breakdown, on which Williams penned a devastatingly honest solo album earlier this year.

“I remember when they got married and I was just like, ‘Wow, this is awesome.’ And then it just fell apart. It shows that all of us really go through the same things, I guess…She seems to be living her best life now, though. She’s got that hair dye line and everything.”

It’s true that we do all share commonalities in our human experience. On her new track ‘The Island’, LASHES delves into her own toxic relationship, which shares more than few similarities with the themes of being trapped that Williams conveyed on her solo record, Petals for Armor.

“I wrote this after watching the film Escape From Alcatraz,” LASHES laughs. “My boyfriend at the time had left me in the house by myself, so I was watching this film that I’d never seen before, and I was thinking about how I was in this one sided relationship, and how it was only working when we were sort of isolated away from the world. And so then, because I was watching the film, it kind of turned my relationship story into a concept and kind of like my relationship was, my relationship hub was the Island, and I wanted it to kind of sound dramatic, have a cinematic feel to it. Like it was almost a soundtrack to the movie, The Island. And it’s just a dark, dreamy pop song. That’s really what I wrote about.”

The song was written in early 2019, but it wasn’t released until everything was cohesive enough for LASHES to line it up with her project, which will hopefully take the form of an EP next year. She’ll play some live shows when Daniel Andrews lets her, and from there on, the only way is up.

In a world of complexity, her one certainty is that she wouldn’t be where she is now without the artists that played through her headphones throughout her youth, and that even if she does listen to EDM now, they will always have been formative to her identity.

“Alternative music gave me the confidence to express myself and my experiences in an unapologetic way…It was the best of times, and the worst of times, being a teenager.” 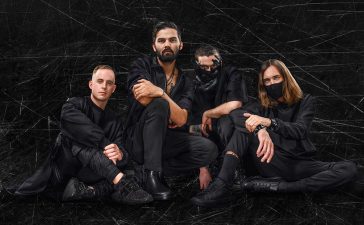