Hoo boy, we advise you to strap yourselves in for this one. We all knew the first glimpse of the forthcoming Battlefield 2042 game was going to pack some oomph, but we doubt any of us figured it would contain this much. EA has knocked the wind out of fans this morning by sharing the official trailer of the popular title, revealing for the first time key insights into what players can expect from the long-awaited release, which has a street date of October 22, 2021.

Coming in at close to 5 minutes, the trailer feels like it has the budget and the panache of a Marvel cinematic one, only better. Set to a re-work of Motley Crue’s ‘Kickstart My Heart’, the snapshot is a surefire way to reignite your passion for online multiplayer first-person shooters. Aside from knocking your socks off, the trailer also confirms that the game will be set in a grim future where the fabric of society has seemingly totally eroded in an all-out global war taking place some 21 years from today.

And you’ll get to immerse yourself in that apocalyptic world, with seven maps set to be available and each being able to fit a whopping 128 players. Even though it’s merely a trailer, the clip manages to hint at the sheer massive scope of the game and its map while also giving us a glimpse at the “dynamic weather, dangerous environmental hazards, and spectacular world events” that developers seem considerably proud of. After seeing the official trailer, we understand why.

Eagle-eyed fans have started picking apart the trailer, detailing some of the new weapons and mechanics that appear to be on offer from a mechanical dog that you can deploy in battle to wingsuits and grapple hooks. Already we know that the title will go to market with no single-player campaign but by the looks of things, we wouldn’t be clocking much hours in that anyway. Standby for the incoming gameplay video set for release in the coming days.

Check out the official reveal trailer for Battlefield 2042 below. 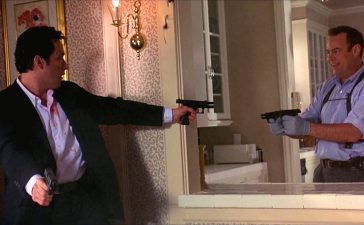 1
25 years on, ‘Grosse Pointe Blank’ is still an indelible Gen X cult classic
2
Powerviolence trio Speech Odd spit in the face of oppression with ‘Control’
3
WATCH: ‘The Boys’ Down Under – We speak with The Deep, A-Train, Kimiko, Hughie & Victoria
4
10 things to know about Hevenshe
5
Exploited: Punks are lifting the lid on band merch made in sweatshops