It’s hard to imagine how one would navigate the elusive path to becoming a video game composer. Though a lot of us grow up playing games, hating on the Halo soundtrack and experiencing sheer joy at the Crash Bandicoot one, being the creator behind the sound desk seems like a position simply out of reach. We caught up with composer James Landino to learn about his journey to thriving in the industry, with his latest project, action-adventure game No Straight Roads, out now.

Do you see your job title as “video game composer?”

Obviously the professional term would be a video game composer. My responsibilities as a creator are being a game and anime music composer and a DJ.

How did you land such a cool job?

I feel like it became cool once I got good at it, because I started when I was 13 years old. I’ve been writing music for video games for almost 15 years now. I remember the faces of my parents when I told them, 13 year old me being like, “Hey guys, I want to write music for video games.” They were like, “What the fuck are you talking about?” So, I think now that I’m making some projects, they’re like, “Oh, whoa, James. Your games are on Nintendo now.” Like, “Oh, okay. I know what that is.” Now they’re on board, but for a while, whenever I used to tell people as a child, it’s like, “I don’t know. Music for video games? What does that even mean?” For me, I started out writing music for games at a really young age. I’ve always want to do this. And it was through my passion, actually in music games. So I’m sure if you’re familiar with a game called Dance Dance Revolution, by any chance?

Of course. Awesome. Yeah, that was one of my favourite games. And so there were a lot of, I guess, fan created versions of DDR at the time on the internet. And so these fan created versions of the game allowed you to submit your own music into the game. So 13 year old me was like, “Well, that sounds really cool. I want to submit my music into these games.” And that was the fire, I suppose, that started it all. And ever since then, I’ve just continued.

How did you get that confidence when you started out to continue to do it? I feel like if my parents were like, “That’s ridiculous,” I would be like, “Yeah, it is.”

So my parents are business people. They’re very smart and they’ve had successful businesses in their life. And I’m the black sheep of the family because I’m the creative type. So to be honest, to praise my parents for a second, they kind of forced me to think about this professionally speaking. So when I was 16, 17 years old thinking about college or uni, I had a sit-down talk with them. And the big part of the talk was like, “We need to make sure that you’ve thought this through.” So it was kind of like I had to pitch to them as a 16, 17 year old like, “Alright, I’m going to go to school for music. And here’s how I’m going to try to make money in this career.” And so I had to think that through from the get go, and I think that really helped me frame how to do this for a living.

What is it like when you play games now with a composer’s ear?

Side point, I’ve learned in life that when you become a professional in video games as a developer, you don’t play a lot of video games anymore. It’s kind of weird like that, but it’s just how it works out. And I guess related to that, I would say, yeah, I see video games differently now. Or in this case, I hear games differently now because I do it professionally. So before I was a full time musician working on my own, I used to work for a company called Harmonix and they developed games like Rock Band, Guitar Hero, and so on, so forth.

So my time there, if anything, it’s a blessing and a curse because on one end, I feel like I grew appreciation for how games are made. And so to be honest, whenever I hear audio in games or whenever I see anything in a video game, I understand oftentimes why things happened for better or worse. And usually when it’s for worse, it’s like, “Oh, I’m sure they had some crazy deadline or some crazy thing happen.” There’s usually a reason why things are bad. Developers are not unaware of why things are bad. But at the same time too, the curse of it is the fact that it’s hard for me to play a game now and just enjoy it for what it is, because at the end of the day, my brain is always turned on, which is natural I suppose.

How do you get these opportunities? Do you find projects, do people bring games to you and say, “We want you to work on it?” How does it happen?

I’m laughing because of the way you say it, like, “Do people bring games to you?” And like, “Ah, yes, the next one, please.” No, it’s not like that. Most people do approach me or my agent or manager, but most people do approach my team for projects to do. And from there, we figure out like, is it the right fit or not? But generally speaking, a big thing for me is I’ve learned over time that the games that I want to work on are the ones where there’s really cool or good people on it, because I’ve worked on enough games where the games I thought would be like the cool passion project, like my dream gig, were actually low-key the worst game to work on production wise. So with this game, No Straight Roads, it was fantastic. I was onboard immediately because the other composers are my friends, Falk Au Yeong, Andy Tunstall, and Funk Fiction were the four main composers. And so we’ve worked together in games for almost 10 years now as a composing team. So, when the audio lead, Falk, approached me and said, “Hey, do you want to work on this music game?” I’m like, “With you guys? Hell yeah. 100%.” So that’s kind of where most games start.

Do you have goals outside of the industry you’re currently in or are you happy for now?

Do you have goals or are you happy?

I love this interview. I’m sorry I’m giving you so much shit. I just really enjoy your questions. No. I mean, I’m a very goal oriented person, but I would say for me, I don’t have goals like score a film or… I don’t have a very tangible goal. My goal is like, I would like video game music to be listened by more… I want video game music to not be listened on the veil of like, “Oh this is game music.” I want video game music to be just music. Right? And so that’s why a lot of the music I write for games is often tribe music that’s typically dance music because, especially as a DJ, sometimes I’ll throw in video game music and people will still dance to it like it’s normal music. So for me, that’s a goal of mine that I really want to try to, I guess, encourage. I’d say that.

Just electronic music or any music for games? Death Stranding released a soundtrack with singles from Bring Me The Horizon and Chvrches.

I don’t know. That’s a good question. I don’t think there’s much of a difference. I do think that a lot of live, when people think of live video game music, they think of like orchestras typically and maybe a band here or there. But not really dance music. And I think DJs especially, my philosophy has been that DJs are typically the new rock star, I guess, of our generation, so to speak. And for me, I’m trying to think in a very contemporary lens what I want people to be exposed to video game music. So I think for me, I don’t think there’s a difference of how we’re going to do it, but with the way how I’m going about it, I think this is the best way to get people to embrace video game music as something more than just from a video game.

The soundtrack for No Straight Roads is out now via Boss Battle Records/Remote Control Records. 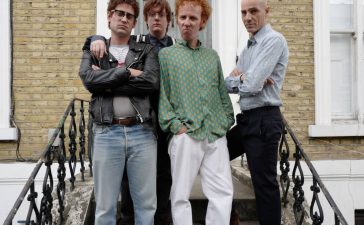 1
‘Creation Stories’: From punk to britpop in the footsteps of music mogul Alan McGee
2
A punk guide to Nepal with Neck Deep In Filth
3
KennyHoopla shares ‘hollywood sucks//’, announces mixtape
4
So you want to be a…game designer (Hearthstone edition)
5
Drown This City firm up EP plans with new single ‘Borderline Existence’