Those who have been paying attention would have noticed something bubbling away over at camp Terra of late since the release of 2020’s ‘Frenemies’. Now, the Melbourne alt-rockers have revealed their intentions once and for all, emerging from their studio hibernation with a brand new EP in tow. Reverie has been given a street date of Friday, February 4th, and this week the band were kind enough to give us another sneak peak at the greater release in the form of new single ‘Arrows’.

Up-beat and sonically shivering, ‘Arrows’ is nothing short of an absolute trap given that at its core, the song is anything but, given that the message buried within is much more relevant to tones and shapes of existential crisis. “The imagery of arrows portrays a piercing internal catastrophization that slowly weighs you down and keeps you up at night.” explains the band of Arrows bigger picture meaning. “The song explores a loss of confidence and gives a snippet of the battle against your own internal monologue.”

With ‘Arrows’, Terra have delivered the suckerpunch of the year; using the soaring soundscapes found within the alt-rock universe to smuggle across a message that’s far too relatable to admit to in a public-facing article.

From there, the band added further oomph to the track by inviting Alt’s Daniel Cullen-Richards for a short, but effective guest slot making use of a rare commodity within the Australian alternative space milieu.

Arrows sets the scene for Reverie – which also features the aforementioned single Frenemies – and if the two tracks are anything to go by which, obviously they are, all those eager to wrap their ears around EP – the first such offering from Terra since their 2017 five-tracker ‘Wasted Days’ – are set to feel some things.

Terra have also been confirmed as part of the impending Knight & Day NYE Festival, making the event prime real estate to cop some of the new tunes ahead of their official release. 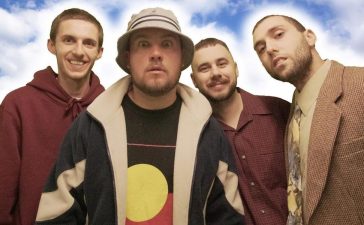