Greatest hits albums are a career goal for a lot of bands, and it’s a goal that a lot of them do get to achieve. But to release an anthology of your hits, and to actually have your fans want it, that is a rare place for a band to be. In the case of Papa Roach, it’s simply their reality.

As Blunt Magazine would learn speaking with frontman Jacoby Shaddix, as mind-blowing as the achievement is, releasing Greatest Hits Vol 2: The Better Music Years is yet another wild dream this group has brought to life.

Throughout their journey, Papa Roach have done many things that they’ve been told they couldn’t; facing everything from label rejections to line-up shifts to tumultuous disruptions in the industry, all of which forced many of their peers to add their bones to the pile.

Naturally, digging into their back catalogue from the past decade to populate their new greatest hits collection has Shaddix reflecting on how it came to this.

“The people around me thought I was delusional,” he recalls of Papa Roach’s beginnings.

“They’re like, ‘Good luck with that, bud.’ I’m like, ‘Yeah, I know.’ Because I’m a janitor at a hospital, cleaning toilets, mopping floors and shit. It wasn’t glamorous, but I had this dream. I had this grand delusion that I was going to be a rockstar when I was a kid. And then it happened.”

“These were the delusions of grandeur that I had, and now I’m living it.” What the fuck?”

All these years later, it would turn out his crystal-balling was more prophetic than fantastical. “People are streaming our music like never before, which is crazy. We’re hitting almost 10 million monthly listeners on Spotify right now. ‘Help’ just went Gold. That was our first Gold record in a long time.”

While ruminating on his past, Shaddix contemplated the changes that Papa Roach have gone through, and how that impacted his own identity at the time. Having said that, it was very much the current state incarnation of Jacoby that ended up calling the shots for the collection. “The 2021 Jacoby knows that this is about the fans,” he points out.

“We definitely let the fans choose three-quarters of what was going to be on this thing. Because we watched the songs that were streaming,” leading them to ask the question: “What were they gravitating to?”

The end result was a healthy mix of singles and deep cuts, including a flip of ‘Broken As Me’ (off 2015’s F.E.A.R.) now featuring Asking Alexandria’s Danny Worsnop. “He fucking slays it,” says Shaddix of the collaboration.

The curiosities within this latest volume also feature remastered versions, acoustic renditions and remixes from EDM artists; the last of which has left a lasting impression on Shaddix. “I think the era of just staying in your lane is over. I want to fuck around in all these different spaces.”

That will hopefully come to life over the next 12 months, with the frontman asserting that there’s “a whole ‘nother new record dropping early next year.”

Creatively, looking into the past while also planning the future has put Shaddix in perhaps a more innovative frame of mind than ever before.

“I think it feeds itself in a weird way. To be able to look back at your younger self and reflect upon who you were and what headspace you were coming from…That’s important, I think, to not forget where you came from. But then it’s also equally important to go, ‘How the fuck are we going to take rock and roll into the future?’

“We believe rock and roll is a valid form of art. And sometimes it feels like it gets a little bit lost in the shuffle in respect to popular culture.”

Shaddix places Papa Roach at the pointy edge of the rock resurgence. And indeed, sales, streaming numbers and charts would agree. As such, they feel a responsibility to carry the torch, rather than just bask in its light.

“Other bands, like Bring Me the Horizon, they’re doing their job to progress rock into the future. We see ourselves as one of those bands that will continually try to progress rock music back into the mainstream again. And that’s something that’s a goal for us, and we dream fucking big. And I believe we’ll fucking go do that. But it’s important that we stay inspired.”

Considering their uncanny ability to transition their visions into reality, it would be unwise to clock that as an empty threat. And they’ll do it in a way that works for them, having had the benefit of choosing between clocking expensive studio time and being able to cook a quality product at home.

“I’m in a bedroom cutting records with my homies again. This is how it’s supposed to be done.” 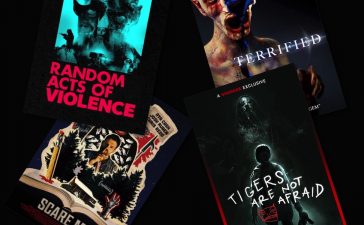 1
GIVEAWAY: Make spring spooky with a horror film bundle from Shudder
2
Placebo share first single in five years, ‘Beautiful James’
3
The evolution of Bring Me The Horizon continues with new single ‘DiE4u’
4
The Weekly Riff: September 11th-17th, 2021
5
In BLUNT #104, Blink-182 gave us a tour of their new neighbourhood(s)

The full lineup for @knightanddayfestival has land

The Weekly Riff Every Friday arvo, we look back

@theused have dropped the deluxe edition of ‘Hea

It's been 22 years since the original trilogy bega

@andrewwk's latest, God Is Partying, is out Friday

Relevant (but on a serious note, take care of your